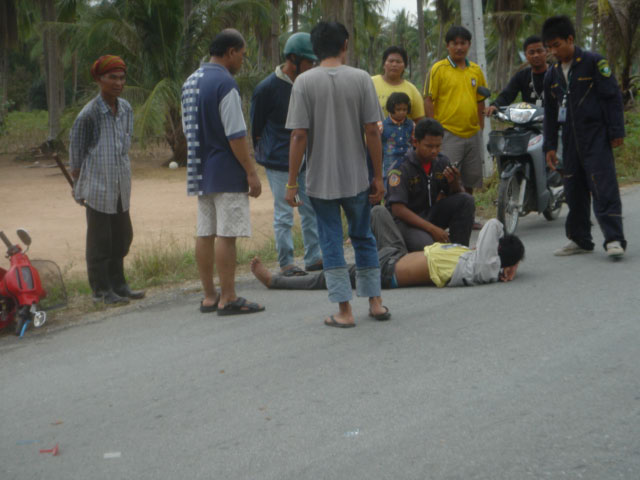 You often hear this ‘If it comes down to a legal hassle between you and a Thai who do you think is going to win?’, as if everything here is thoroughly rigged against the farang. I couldn’t disagree more. Maybe it is true in some areas, but as I’ve seen and heard in traffic accidents the police are effective and fair. This opinion applies to my experiences in Pattaya, and also similar discussions with friends living up country.

I was recently involved in an accident. Here is what happened. I was driving a pickup truck with my wife and some workers in the rear on a curvy country road on the way back to Pattaya when a motorcycle going about 120 km per hour came around a rather sharp corner and laid the bike down. The rider came off the motorbike (prior to hit impacting the auto) and the bike became like a weapon speeding onward towards my truck, which hit like a thump!

At first we were kind of in a fog as to exactly what had just happened. The truck had sustained substantial damage and one tire was punctured. I eased the truck off to the side of the road we got out to check on the rider. He was down but basically OK. A group of Thais were around and taking care of him. Ms. Dozer then proceeded to take some pictures of the scene which was a smart move.

It was fairly clear that this wasn’t our fault, at least to us. The sequence of events went something like this. Some local traffic officers arrived and tried to see if we would agree to ‘no fault, each just go their own separate way’ to which I said no. Then our insurance agent came and wrote up an accident report. In the mean time it started to rain, which made the photo evidence even more valuable because there was a dig mark in the street where the moto came around the corner and lost it which disappeared in the rain (but was visible in the photo).

By this time there was a group of Thais on one side of the road and our group was on the other. Some locals that we know came to sit with us. They said that had I not been a foreigner the other side would have just admitted responsibility already (greng jai) and got on with it, but they would ‘take a spin’ as everyone has heard the same tale – ie. Who do you think is going to win between the foreigner and Thai? In the end they have to think there is a chance the police are going to side with the Thai and thereby the moto would get full repair, etc.

Also, the local police seemed to side with the other (Thai) party. By the marks carved in the road by the motorcycle you could see the impact point. They said ‘you were in the other lane’, which was a stretch. It was basically in the middle of the road, so my auto would have been in my lane. In any event they were suggesting there was enough doubt that I agree to ‘no fault, each go your own way’.

When it is a contested case like this you need to be patient and just wait. This entire event lasted from 10 AM until 6 PM. At about 3 – 4 PM the evidence police team came and did the evidence collection, interviews etc. I thought they were very professional. They took pictures of the scene, interviewed witnesses etc.

Then off to the police department in Banglamung. The vehicles involve in the accident are ‘impounded’ pending the outcome of the investigation. Further evidencary photos are taken, and then there is a discussion with the senior traffic officer who makes the determination. In this case he cited the motorcycle rider was cited for reckless driving which was the anticipated result.

I’ve seen it also in cases that aren’t so clear. A friend of mine (farang) called me to help translate at a scene in North Pattaya where a bus pulled out of a parking lot and then without looking pulled right back into a parking lot on the same side. My friend laid his motorbike down due to being cut off, but there was no direct impact with the bus.

The bus driver was like ‘well first off your motorcycle didn’t even hit the bus, maybe you just slid out of control by yourself’, and I was thinking this is kind of iffy, but my friend was insistant. The police detective after taking the statements said ‘I know that area and I know just how the bus drivers have a habit of pulling out and pulling back in again with no regard for the on-coming traffic’ and thereby proceeded to side with my friend the farang. In the end I thought this again was the ‘just’ call, not that the detective was leaning towards the side of the farang, just that he had previous knowledge of how the busses drove recklessly coming out of and going back into that large parking lot. They typically just pulled out and then without really looking just pulled back in again, creating the traffic hazard.

OK, these are just two anecdotal experiences, but I’ve heard of more like this. I’m sure there may be cases where the farang gets the short end of the stick, but as I’ve seen it the traffic system is pretty just and not at all prejudiced in any way.

I think it is important to get the message out, just last week another friend got rear ended, which is of course the one accident that can never be your fault (never the fault of the one getting hit). He had heard about ‘it can make trouble if you go up against a Thai’ and so he didn’t pursue it, just drove off to pay for the repairs by himself.

The infamous Nong Natt is back in the news again. In this story out of the Thai press, Nong Natt announces she is four months pregnant, or is she??

Robin T’s idea for the coolest ride on the block. Get into brand new 1hp Kubota diesel/3 ton payload for about 250,000 baht.

What to do when someone starts dumping garbage right by your house.

Resolution on the neighborhood dog murders. For dogs around here it tends to unfortunately be survival of the fittest.