In the strange but true department some bizarre news out of the Daily News of February 3 and 4th. I like to read the Thai newspaper and look for stories that run on consecutive days, I guess just to see what is important news coverage as far as the newspapers. The hands down winner for unwarranted news coverage this year is wayward Nong Nat.

Sometimes she is reported on by her nickname and sometimes her full name, transliterated in various forms as follows:
Kesarin “Nong Nat” Chaichalermpol
Natt Chanapa
Nong Natt
Natt Kesarin
Nett Kesarin
Note that Nong would be the address you would give to a younger person and Natt is her nickname. Previous article is here: [Nong Natt runs afoul of decency laws](http://coolthaihouse.com/blog/index.php?p=136 “Nong Natt”). Read on for a summary of the bizarre story.

On the 3 of February, the story as reported was that Natt was 4 months pregnant and would be living with her boyfriend, who she would only reveal his nickname as ‘White’. She said she would totally stop doing anything lurid in deference to the unborn child, although a lot of nude modeling jobs were on offer. The story went on to say that White had a 3 year old daughter, who was quite fond of Natt and that Natt would raise her as if she was her own.

The article further states they are not interested in getting married, as they don’t want to be that tied down, but want to live together and work together in harmony. The boyfriend ‘White’ is a widower who is 38 years old. She doesn’t want to reveal the full identity in deference to his family (with regard to her notorious past). She didn’t consider an abortion because first off her boyfriend would never allow it. He loves children. And furthermore she sees this as the start of a wonderful family.

Nong Natt and and White had been acquainted for quite a while, but had never thought of each other in any other light than as friends, as both were involved in relationships. Quite coincidentally, they both happened to end there relationships around the same time and then caught each others eye.

When the pregnancy started she had real bad morning sickness and couldn’t hold anything down and couldn’t eat fish or seafood at all. She cut down on modeling work so she would have more time to rest.

The story in the following days paper states that a entire team of news reporters descended on Nong Natt’s house in Pitsanulok in North Thailand for and impromptu news conferance. With a big smile on her face Nat came out to face the news media and said ‘see I’m not trying to dodge anybody’. She further went on to explain that it would be totally impossible for her to be 4 months pregnant as she hadn’t gained any weight at all, same thing figure. As far as White, they are only acquaintances and nothing more. She also noted that she had seen reported in some news media that she had given birth already, another total impossibility.

She further announced she is under contract with a music company to produce an album of Thai folk songs (luk tung). She said she would be talking to the media more as the details of this engagement with the music company firmed up.

She emphatically states she was infact never pregnant, the entire episode would be totally impossible since she has been in the company of others since the story broke.

The final paragraph goes on to state the original news reported stated that Nong Natt did grant an interview and that she did state the facts as reported on the first day.

It is obvious that Nong Natt has really learned to play the media game, who jump through hoops to interview her and end up looking like idiots. I would say the media really got there chain pulled on this one.

The story of how Mrs. Dozer made Dozer fat. How Dozer went about losing weight.

Finally it was time to determine the cause of continually getting lost on the way to the airport. A test trip was in order to see the source of the problems.

Fill dirt being brought in for the mini project. Grades and appx. cost of fill dirt. How to tell good dirt from bad. 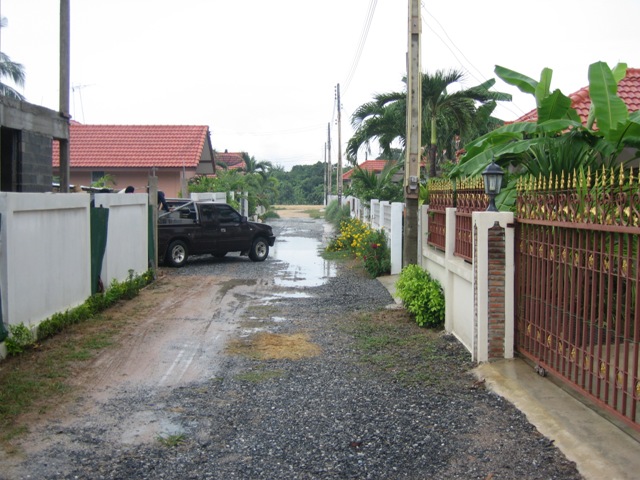 How to catch a feisty rooster that like his freedom! How many people does it take to catch a rooster and what does he sound like after being caught.