Electricity is used extensively during the construction process for everything from pumping in water, powering electric tools and welding the roof truss beams together. This situation isn’t one where permanent electric can be set up – there often is no street address yet assigned, there is no house (yet) to inspect to allow for permanent electric and often times the nearest electric post is many meters away. What is done is to establish temporary electric service, which should generally be used for 6 months or less. In the case of the coolthaihouse prototype, electric was run from the front road which sits about 300 meters away. Applicants must apply and pay a 10,000 baht refundable deposit. Then your electricians can install the necessary wiring. After that an electric department technician comes out and inspects and if everything is up to stuff the meter is installed.

Fast forward to the end of the project. We applied for permanent electric, which would move the house off of the temporary and on to the permanent post. Our electrician set everything up at the electric post in front of the house. Then a city electric person came and inspected this setup, disconnected the temporary electric and moved the meter to the permanent position. We then went to inquire about when the 10,000 bhat deposit would be refunded and we were told we would need to wait a while, probably a couple of weeks.

My wife was doing the talking, except for me occasionally interjecting something into the conversation. Since I speak pretty fluent Thai I could understand everything that was being said. I followed right along with the wife’s flow of the conversation occasionally interjecting something. There were two separate accounts; one was a temporary account which had a 10,000 baht deposit and the other was a new fully paid account. If a bill was due on the temporary account, why wouldn’t they just deduct it from the 10,000 baht deposit? In any case, why would they cut our permanent house electric, since for sure there was no bill due on this account?

I’ll never forget the response from the electric worker. “Why are you talking about two different accounts? Maam, listening to you gives me a headache”. I mean, truly how rude an insulting can you be. She’s getting a headache! How about us, it was our electric that was cut for no reason. This went on for a while – trying to figure out why they had cut the electric. We went to talk to some other people at the side of the building. Here is what became clear: There was an amount due on the temporary electric and that *somehow triggered* the meter to be cut. As to figuring out why, both my wife and I already had *already gone to plan B*. Can we just get the electric hooked back up again? This is a much easier approach than trying to figure out why something had happened here, especially when dealing with government agencies. We have a problem, our house has no electric and we have money to pay any kind of bill which caused it to be turned off – is an easy equation to understand. Indeed, we paid the arrears on the temporary electric of 1,400 baht and the electric was reinstated a couple of hours later.

As far as the 10,000 baht deposit, yes it did finally get returned. It took about 6 weeks, which of course was longer than the 2 weeks I was initially told.

If you’re wondering where the worst parking nightmare is in Thailand, you don’t have to look much further than the parking lot of the Banglamung electric department. Best to go by motorcycle, if possible.

A good way to check if your cinderblock factory is supplying quality blocks or not.

A reader wants to know about cinderblock wall construction. Is is a shortcut?

A small apartment building which demonstrates good land use that makes for a ‘community’ feel.

Should a house garden be facing north or south? 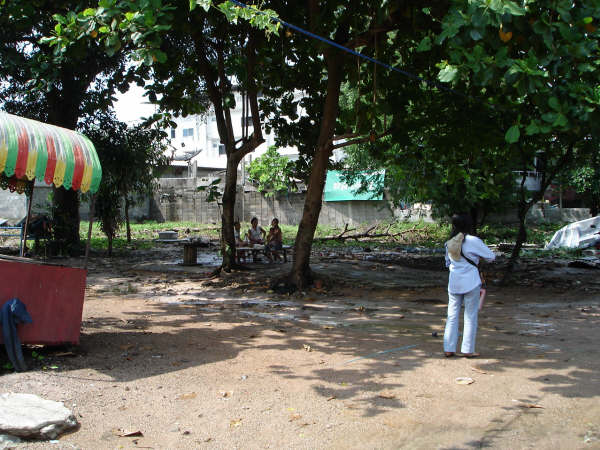 David S (coolthaihouse member) is doing an interesting 2 story project in Naaklua. The story of his land purchase and initial project plans.

Peter M: Garbage – is there a solution?