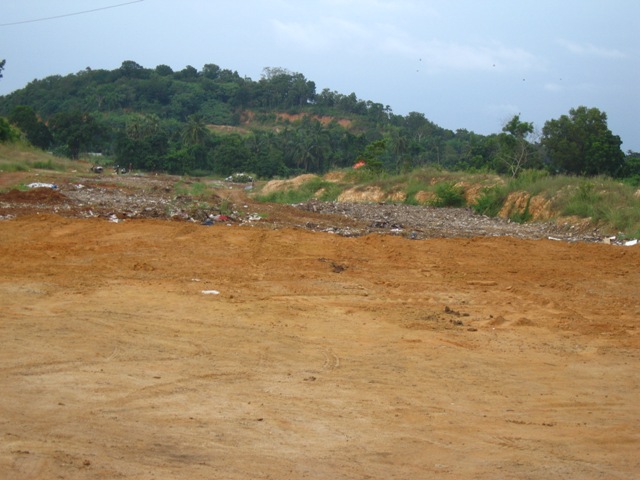 Some things here just seem inefficiently done. Many years ago when the building boom first started to hit Pattaya, Thailand there was great demand for fill dirt. But where to get it? The answer of course was ‘way out in the boonies’ where the land wasn’t worth anything. But how far out in the boonies? If too far, transportation costs would be too high. If too close, the land sacrificed would be too costly. So the right answer was: just a fair distance from the edge of development.

And of course what happened? The land was stripped down, dug into a big hole in the ground, only later to have the wave of development move on by it. So now there is a huge hole in the ground that could potentially be worth quite a bit of money if only it could somehow be filled in again.

Of course it would be too costly to use actual fill dirt to do the job in reverse, but there is an obvious solution lurking out there somewhere. Of course! Open it up as a refuse dump, allow people to come dump construction debris there for a year or two to fill it in again.

When I looked at the size of the crater before I thought it was pure lunacy, but now after some time and with a skim coat of dirt brought in on the top, I thought to myself, ‘they might actually pull this off’. It looks just like a well prepared area ready for development.

I’m sure the ultimate consumers of the land won’t know anything about its history or the fact that there is about a meter or two of ‘garbage’ fill below them. That’s why it pays to move slowly and thoroughly check stuff out here. Some things are unfortunately not exactly as they appear on the surface. On a serious note; it wouldn’t hurt to excavate a little bit of the soil on the land you’re thinking about buying to see what lurks down beneath.

Laurence’s building project in Mai Sai and a picture to boot.

I recently posted an article with a link to a high tech solar project that was supposed to be factual, but is only a in reality a marketing gimmick.

Illustrations of various types of tiles.

cont. Image buying a piece of property in good faith on the understanding you can share a road — only to find out it’s all a con.

Things to watch out for when selecting a construction company. Unfortunately there may be easy shortcuts.