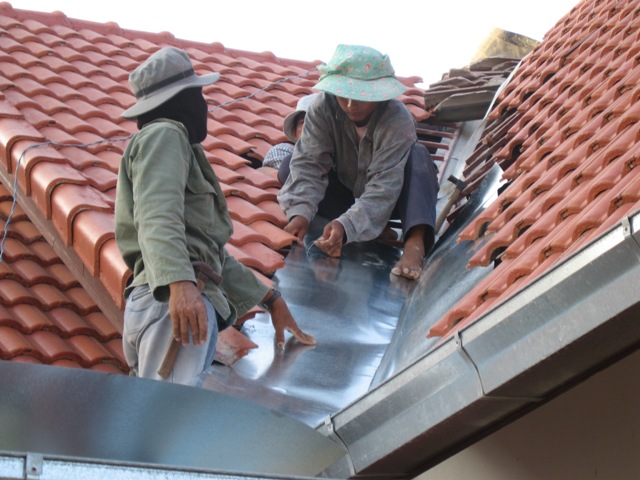 If there is one critical area of any house project which can go oh so wrong in so many ways — it is the roofing. The ubiquitous Thai construction crew is fairly skilled in many aspects of construction, but one common shortcoming is in roof construction. As it turned out here, the roof valleys were done totally inadequately. If you think about it, roof valleys would often not come up in up-country construction, where houses commonly have no roof valleys. In future projects (if I knew then what I know now), I would definitely farm out the roofing to a company which specialized in them.

Anyway, on to the repair. The company which came in to do the fixes was known by me as I had watched them do the roof valleys on a neighboring project. At the time I thought, yes that looks about how it should be done. Although this company does do entire house projects, they also specialize and also do individual roof jobs.

There basic technique is this: They use a 1 meter wide piece of flat thick galvanized, which they score down the middle with a two by four making the piece into a v-angle which will sit in the valley.

I will report back during the next heavy rain! Update: Yes! It is totally dry up in the attic during a heavy rain. (This house is located in Pattaya, Thailand)

What to do when someone starts dumping garbage right by your house.

Boon Mee asks a question regarding the correct sequence for bring in fill dirt, in relation to excavation of a pool and a perimeter wall.

Separating walkway due to adding a section incorrectly.

So you think you can do things differently here? How far do you innovate, or deviate from the standard construction processes here and get away with it?

In this Hypothetical is Joe just being a good neighbor, or is he being nosy? Among other things, this story points out there is a different take on trash here.

I recently posted an article with a link to a high tech solar project that was supposed to be factual, but is only a in reality a marketing gimmick.