*David S project continued*
The house is going to be a 2 storey, 4 bedroom, 3 bathroom house, the enclosed area is 11.0M x11.0M with integral car port/garage.

We are still awaiting the building permit from Pattaya City hall, this has taken 6 weeks so far, however the man keeps saying “nearly ready can have next week”, but which next week is unclear. We have cleared the site, and it is ready for backfilling, but first I need to get a soils report to determine the allowable ground bearing pressure (for foundation design). Do you know of any geological or engineering consultants that could handle such an investigation?.

On the subject of budget, we are looking at around Baht 8000 per square meter, and hoping to come out for the house at around 2.0 M. We will get full estimates once the Thai version of the drawings come out of City Hall. a swimming pool should add about another Baht 400,000.
The question on the bathrooms can be easily solved by reversing the position of the dressing rooms thereby giving the bathrooms an outside wall. My intention is to have a powerful extractor fan in each bathroom venting via a duct to the outside through the roof overhang. Keeping the bathrooms adjacent to the corridor is that it reduces the amount of drain and water pipe runs. Also one bathroom serves three bedrooms and must have access from the central corridor. Construction of this set up is not a great problem, as long as you have plenty of ventilation, the only problem could be if the city planner objects, but I cant see that happening.

The site cost us 2.3 M Baht and is a little over 200 TW, it is located off Soi xx in Naklua (near Pattaya, Thailand) and is approximately 600 meters from the fishing pier. There is plenty of land where we are building and I believe the land owner is selling individual parcels.
I will keep you posted on developments.

>As far as soil testing and reports, I can’t say I’ve heard of this being done, although it isn’t a bad idea. Normally the recommendation is to base the depth of the dig for the foundation pillars from the top of the original soil, not fill, and the depth is normally 1 meter on a bungalow and a bit more on a two story.

What are the costs involved in setting up and maintaining a company?

Some ideas being throw around about Dozer’s upcoming 6 rai building project.

A sample of rebar framing as constructed — which is used to give strength to the foundation column.

A corrupt subcontractor gets in a unique position to take advantage of his workers — and he does.

Prefab framing — is there an advantage? 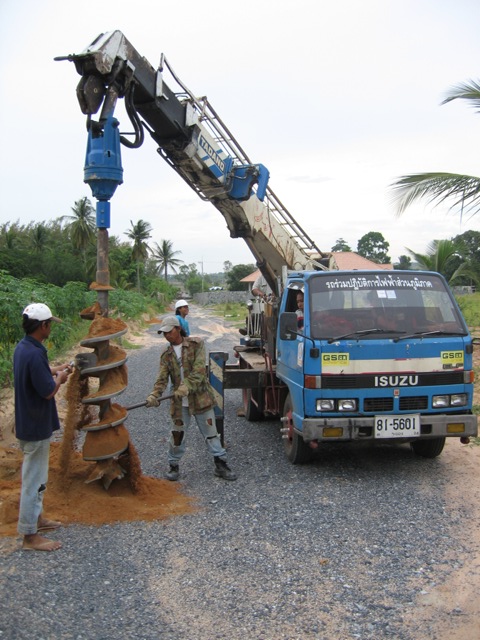 These automatic electric post hole diggers are better than the conventional dig it by hand method.