Here is an update on steel and other prices since that runs from the beginning of 2008 through the beginning of 2009, the figures represent actual purchases. As you can see from the following table, it was a massive roller coaster ride, much as what was seen with the price of crude oil. Since steel prices are set internationally and determined by global factors, the amount of price fluctuation is large compared with products produced solely within Thailand, for example, cement.

Even though the year over year price of steel was down at the beginning of the year (see table), what was surprising was that other costs had either not declined, or were in fact increasing. The labor cost to install on electric light increased from 130 to 150 per fixture. Aluminum windows of the same quality and standard did not decrease in price but stayed about the same. Although much of the increase in the price of cement during the 2008 gas and oil squeeze was in fact blamed on the high price of gas and transportation THE PRICE OF cement is not go down and many types of cement (Tiger Green) increased by about 20% since the beginning of 2008.

Despite the price gyrations with regards to internationally priced commodities (steel/gas), it seems we anecdotally like we are still in inflationary times. Steel prices were captured since they do make up a large percentage, in relative terms, of a construction project. 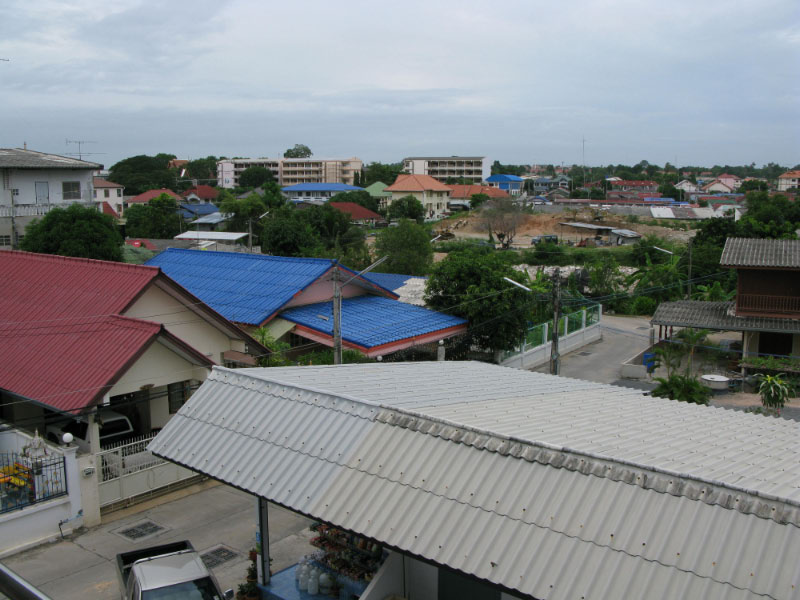 Watching Thai workers can sometimes be fun. Why climb up to the top of the foundation column to wet it down when the water can just as easily be throw in that general direction?

You run into them everywhere. Shirtless dudes in restraunts, banks, on the street, in the markets, all shirtless. What is it all about?

What is the future for land prices in the Pattaya area? What determines selling price. Is a farang your best choice for a real estate agent? and more….

Maybe nothing that unusual about trying to sell a hole in the ground, but what about someone buying?