*neil m*i have read, with interest, your site and noticed the difference between Thai construction and farange construction.
there is one point that i have noticed not mentioned and that is damp course, to stop water invasion from the ground up to the house.
this is standard in western countries but in the years that i have been in Thailand i have never seen it used.
do they us any material for this or just allow water saturation to deteriorate the property over the years?
i intend to build a place myself, (don’t tell me, i know it will be hard work), and would like to know before i start.
thanks for any info you could provide on this.
should my place develop i will update you with horror stories.
>robint: the short answer is that they dont use a damp course as we know it in europe, in fact a damp course was only mandatory after about 1920 when they brought in cavity wall construction, prior to that a lath and plaster construction was used which kept the damp wall away from the plaster

>mostly rising damp is not much of an issue here as the ground is usually raised, of laterite/sand and bone dry. you can see a spoilage of paintwork on the walls sometimes, often a row of tiles is place d around the room as a skirting

>you can mix pva wood glue in with a cement mortar to make a water proof layer below ground level.

>what i would recommend is using a sheet of polythene under the concrete floor and right into the ground beam. it will prevent rising damp on the concrete pad (which is a nuisance if you place any on the floor like a cardboard box for any length of time, but more importantly it acts as a termite barrier, my pet hate.

>suggest your reader sends in his designs for interactive comment, don’t build off the back of an envelope PLEEZE

>editor: definition *a course of some impermeable material laid in the foundation walls of building near the ground level to prevent dampness from rising into the building (syn: damp-proof course).

>Rising damp is ground moisture containing salts rising up a masonry wall by capillary action. The common causes are deterioration due to age and bridging of a damp course with internal concrete floors, renders or external paths and earth levels.

>I was in a rental house here in Thailand for about 2 years that suffered from the symptoms described above. It was near the ocean, which maybe explains the salt content of moisture that would come up the walls. The walls weren’t noticeably damp, but paint would not adhere to the wall. In was a know problem in the area and every single house suffered the same exact symptoms. However, every other area I’ve been I have not seen the problem.

>Suggest application of some kind of damp course during construction, especially if adjoining houses show signs of a rising damp.

Feedback: 8 – 12 words per column makes for a more readable format.

Water pump blow out and repair. Recommend getting a pump with a stainless steel tank from the beginning. 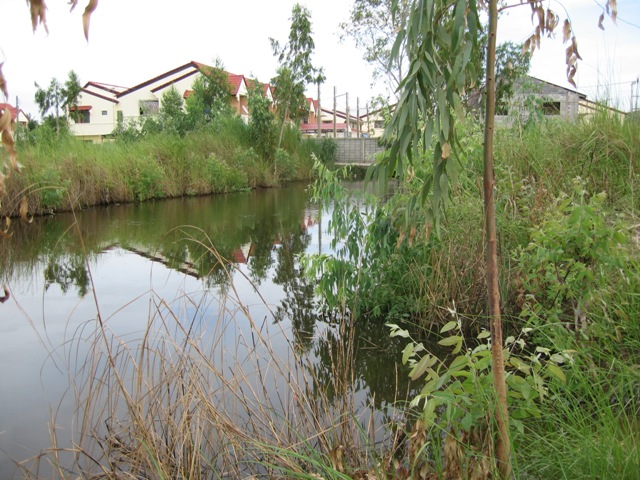 A picture of the coolthaihouse apparently showed up as a house for sale outside London England.

Feedback Q and A about land cost.